“Workshops for Warriors has exceeded my expectations and changed my life, it truly has been a game-changer for me.”

Barry was raised by a struggling single mother in San Diego, CA. During his childhood, they moved around a lot, lived in and out of homeless shelters, and he attended dozens of different schools.

In 1999, Barry joined the Army and when asked why he said, “He was seeking more stability in his life and hoping to find a mentor in the army.” His grandfather and uncle both served and retired as officers. During Barry’s time in the Army, he was stationed in Germany. After leaving the Army, he moved back to San Diego in 2011 and relapsed into homelessness and living on the streets and in shelters. He faced many hardships during this time, surrounded by substance abuse and violence. 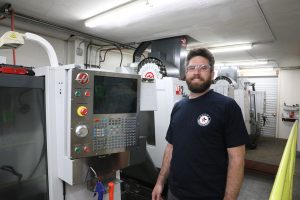 “Thinking about having a job, living in an apartment, paying bills, having a car… It was overwhelming,” Barry explained, “as I was getting older I realized I had to make a change if I wanted a future.” He was at Veterans Village of San Diego looking into courses and found Workshops for Warriors. “I kept hearing great things about how streamlined WFW is and that it was exactly what I was looking for.” Barry applied online and couldn’t believe it when he was accepted.

Barry excelled during his time at WFW. He graduated from the program with 29 nationally recognized machining credentials and a job offer from Chromalloy in San Diego, CA. “Now I have a job with a great company. I didn’t ever expect that. I really expected to just do this and then go back to living on the streets,” he said. Barry is leaving Workshops for Warriors with a great new foundation and a chance at an entirely different future after our four-month program.