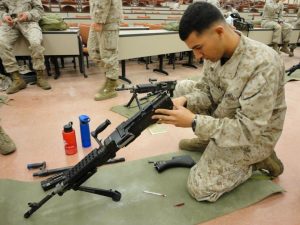 “The honor, the duty, all the characteristics of the Marines is what I wanted to be. A few friends in my town and I got to see their graduations and I wanted to be that; I wanted to challenge myself. As a young kid, I wanted to do the hardest thing there is to do, and that was the Marines.”

Ryan’s dream was to fly. He originally joined the Marine Corps with a flight contract and thought he would be enlisted for at least 8 years. Unfortunately, everything changed and left him to figure out a new plan for the rest of his life much faster than expected.

“I joined in 2010 and started as a Marine Corps reservist at Camp Pendleton and was there for one year. After that, I went to Officer Candidate School (OCS) and became an officer, and then was commissioned in 2011 as a quantic VA for two years. In 2013 I got caught up in the downsizing so I earned an honorable discharge early [after 3 years enlisted], so I was not prepared to transition. I was in a scramble. I had a 2-month notice knowing I was getting out so I had to get my affairs in order.”

Because he had to come up with a plan quickly, not unlike many other Veterans he thought that since he had his GI Bill® he should go back to school. He had a Bachelor’s degree in Political Science that he earned before enlisting at 22 years old, and during this time he earned a certification of completion for aviation operations at a community college. However ultimately, he decided he wanted to get back into the Military.

“I thought maybe I would enlist in another branch, so I tried to apply for the Army’s flight program. My mindset was still stuck in that military mindset. I wanted to still be in, so I applied for the Army’s officer flight training program. I would have gotten in, but about 2 months before I got out of the Marine Corps I got sick and was having seizures. I had a clean record, but because that was then on my medical documents, the Army wanted me to go one year without any symptoms arising from having those seizers to write me a waiver.”

Ryan made it through that one year without any issues, but unfortunately, he still didn’t get to where he wanted to go. 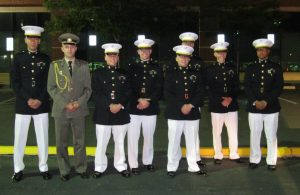 “So I went one year, and by now it is 2014, and got with the recruiter again and said ‘okay it’s been a year and nothing has happened; let’s do this.’ They basically told me that it’s 2014, so things are different now because of the continuing downsizing of Military so they don’t write waivers anymore. So that was my last chance at flying. They said I could do ground services, but I said no. Even the certification I earned in the civilian world wasn’t enough to get me there.”

After the disappointment of realizing flying wasn’t going to be his future, he decided to move to a completely new city to him, Tennessee, in the hopes of finding a new path. He spent some time in hospitality, a little bit of time in security, took a job as a mover moving furniture, and even dabbled in sales. Unfortunately, nothing felt like a long-term fit, and his life was about to change quickly once again.

“None of it was steady work. I was just doing stuff to make ends meet, but none of it was a career. I had a hard time breaking into any management roles. I did have a Bachelor’s degree, but I was not able to get a foot in the door no matter how hard I tried. I was just all over the map trying to find something that equated to what I did in the military. For about one-and-a-half years I was really really struggling.” He added, “At that time in 2014, I met my now wife. I was still doing these odd jobs and I jumped into a situation where I had to start taking care of 2 kids she had from a previous relationship. So I had to jump into this role and I realized I needed to do something different.”

It was Ryan’s dad that made him first think about machining. His dad was a software engineer and his brother was an electrical engineer, so that was always pushed on him. He always told his dad he wasn’t interested because he liked doing things with his hands, which is when his dad suggested mechanical engineering.

“[My dad] said if you come here [to California] I’ll try to work some connections so we’ll see if we can get you started in something. So I was basically at the end of my rope and I told my wife we can go and try something new to see if it pans out. So that’s what we did, me, my wife, our two kids and a newborn at the time all moved in with my parents.”

It was around this time he was exposed to SolidWorks and ultimately found Workshops for Warriors. 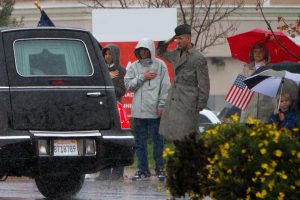 Ryan at a funeral procession for a fallen Army soldier in San Diego, 2011

“I was talking to someone in the engineering field and was introduced to SolidWorks. I tried [the program] for about 1 month and was just running into some issues. I’d never seen it before or tried it before, so I was treating that as a full-time job while job searching for other jobs. I ended up at a SolidWorks meeting and they had a little YouTube clip of Workshops for Warriors and Hernán was in it and was talking about the programs and all the different training they did. And I thought that’s it – that’s my ticket. This has to be it. The light switch went on. What are the odds that I was in this user group meeting at the time they showed this video clip?”

Ryan looked up courses and enrolled in the machining program immediately. For Ryan, the fact that the course was free made a big difference in his ability to attend.

“It was a complete godsend that it was free to attend. I immediately thought ‘how am I going to afford this?’ and it was so seamless. We were running off of borrowed money at that point from family, and switching your GI Bill® would have been an absolute mess. I was blown away by how it was all set up.” He added,

“When I first got to Workshops for Warriors I wasn’t sure what to expect. I had visited briefly so I saw the setup but really didn’t understand everything that I was going to be immersed in and exposed to. When I did I couldn’t believe it. I’ve examined other programs and there is nothing that comes close to what Workshops is able to offer. I’ve worked with other machinists with a 2-year degree from a technical school in CNC machining and they don’t have the aptitude that Workshops does which absolutely blew my mind. They don’t teach Mastercam or programming at a lot of these schools, and they don’t do any kind of CAD training at all. Maybe a little exposure to SolidWorks, maybe a little AutoCad, but as a whole, you’re not getting the knowledge or depth you get at Workshops.”

After graduating with 14 nationally recognized credentials, Ryan ultimately ended up back in Tennessee as a CNC machinist with Barrett Firearms and then moved on to Murray Machine & Tool as a CNC Machinist.

“My first job said ‘you don’t have a lot of experience, next to nothing out of school except for internship you did during class, but all these certifications made things pop for us as employers. Seeing the aptitude made it so that we took a harder look at you. It made up for lack of experience.’”

However, his desire to get back into designing parts and using SolidWorks kept his eyes open for other positions.

“I eventually got hired at Plastic Industries, (PI) and it was essentially an engineer position. I work for both Hydra Pools, Inc. and Knight Rifles where PI is the parent company. One is designing pools completely in SolidWorks, and the other is doing prototyping, design, and machining in-house based on programming parts. If I didn’t have Workshops for Warriors, I never would have gotten that job. My title is Engineer. I would never have thought in a million years I would have been an engineer short of going to school, and Workshops for Warriors made that possible.” 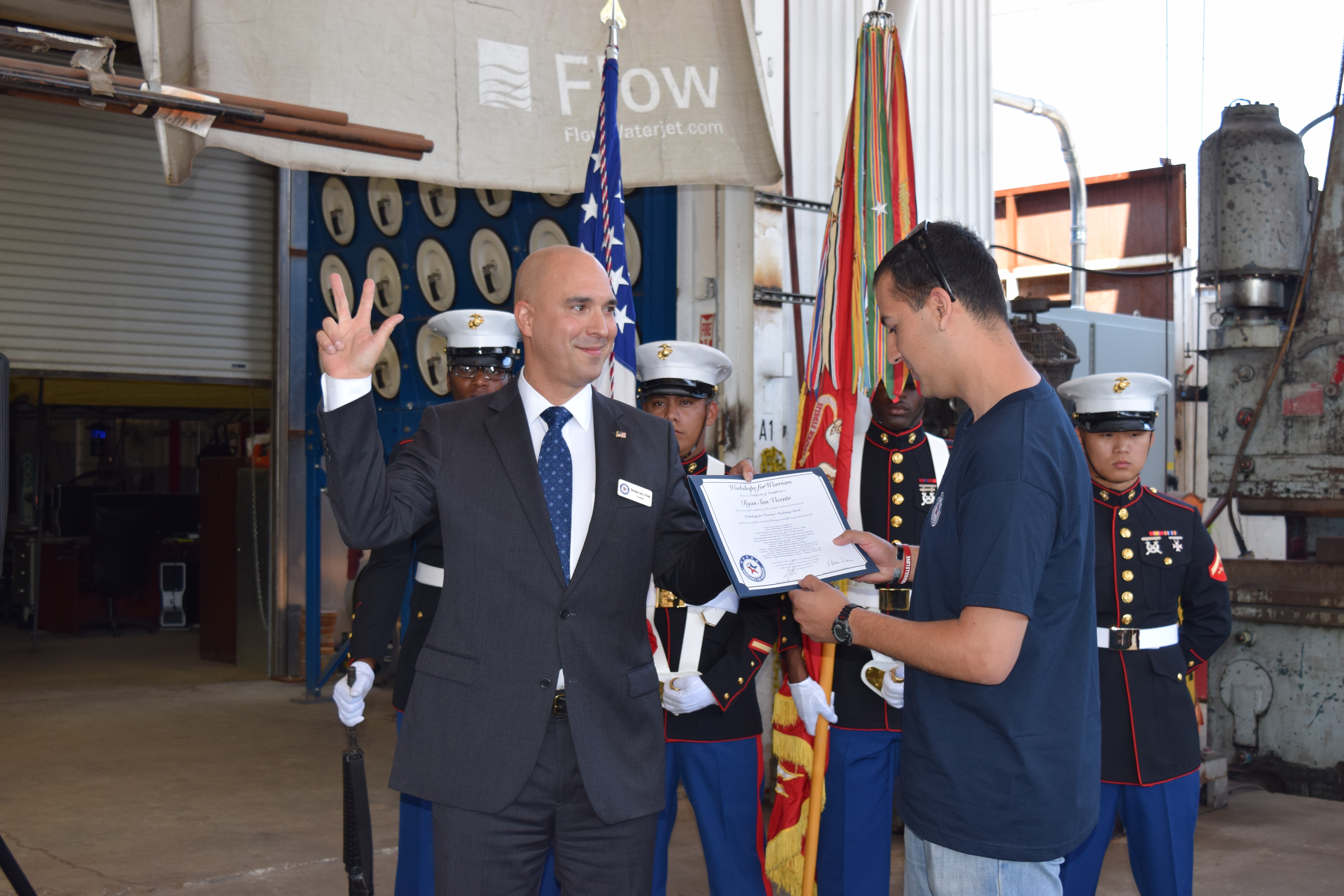 Ryan graduated with the highest number of nationally recognized credentials at Workshops for Warriors’ Spring 2016 Graduation and was recognized during the ceremony.

For Ryan, he knew he was embarking on something good pretty early on during his time as a student at Workshops for Warriors.

“I would say the first several days getting into the shop and using the equipment was big for me. I had no background, and then seeing it actually play out in the machines – to be able to take and feel the thing you made – was unbelievable. I had a certain level of confidence knowing that this is going to lead somewhere.” He added, “If it wasn’t for Workshops for Warriors I don’t know where I’d be. I’d still be trying to catch up with bills. It was pressure day in and day out. I am so grateful and so thankful to them. And I don’t have to go back to school, my wife can stay at home, we live in a big house, each kid has their own room, I’m 15 minutes away from work, salaried, making good money as an engineering. This is stability our family has never had before. Workshops for Warriors completely transformed my life.” 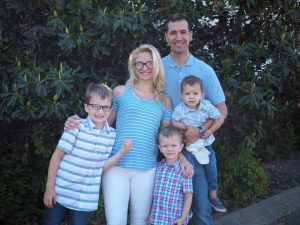 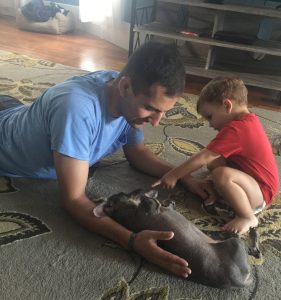 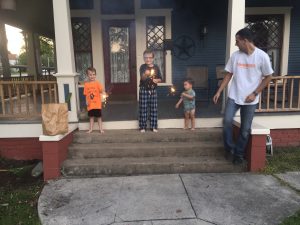 Ryan earned the following 14 nationally recognized credentials while enrolled at Workshops for Warriors in one 16-week semester: