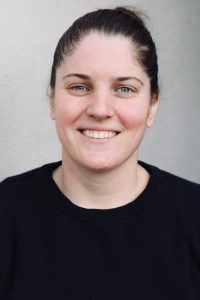 “I like trying new things, but I’ve battled with anxiety. Here, we all just kind of get each other. It wasn’t like that in college or anywhere else I’ve been since I got out of the Navy.” — Olivia, Spring 2020 Machining Student

After an honorable discharge from the Navy in 2011, California native Olivia Woodring worked for a national beverage distributor for several years, then bounced around to a new job about once a year. She served two years in the Navy Reserves and spent time at a company repairing gym equipment and building gyms. She even tried going back to college.

“I hated school. I just didn’t do well at it, which is why I enlisted in the first place,” Olivia said. “When I was 19 my dad said I either had to go to college or join the military. He was a plumber in the Bay Area growing up, but he had served in the Navy, and my grandfather had served in the Marines.”

As an electrician’s mate and then later as a member of detainee operations, Olivia was part of a pre-commissioning crew in Norfolk, Va., before volunteering for a deployment to Afghanistan. She got out soon after, but never quite found what she wanted, all while battling bouts of anxiety and depression.

During an appointment at a Veteran Service Office in San Diego, she was prompted to check out Workshops for Warriors.

“I’ve always been interested in how things are made, in working with my hands, but I didn’t think I could learn this kind of material,” she said. “I never liked class in college, but I like it here. The people, the structure — it’s all the things I miss about being in the military.”

After graduation from the machining program, Olivia says she is open to a wide range of possibilities but is especially interested in the manufacturing of guitars, which she has played since she was 12 years old. Now that her family lives in Idaho, she’s also considering opportunities in nearby Spokane, Wash.