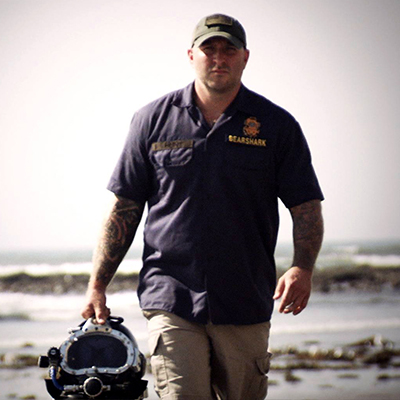 Originally from Flint, Michigan Erik had plans to go to college when tragedy struck on September 11, 2001. It was this moment that he decided to enlist in the army where he spent a total of 8 years; 4 active years and 4 inactive years.

“I volunteered to go airborne in the Range indoctrination program. I broke my back jumping out of an airplane so they gave me a choice to go to range battalion or go to the needs of the Army. I went to the needs of the Army because I thought the war was going to be over very quickly. I then got assigned to the 82nd airborne division and shortly after I deployed to Iraq 2003 – 2004 and was a part of Operation Iraqi Freedom I and II. Then when I came back I was deployed to Hurricane Katrina and did search and rescue and stabilization after the storm.”

When Erik got out of the army in 2006, he moved back to Flint and found that transitioning was harder than he expected. In 2006, he explained that there wasn’t much of a transition team out there to help. He started going to college right off the bat.

“It was a lonely and a hard time in life. I had a really self-destructive few years dealing with it by myself. I was like a dog off a leash. I’m free to do whatever I want to do, but all of a sudden you’re alone and don’t have a useful skill or job.” He added,

“I was going to school for a Physician Assistant program because I was a paratrooper and a medic in the Army. I started taking psychology classes, pre-nursing, and pre-med classes. I found this still wasn’t a civilian equivalent to [Army life]. I’ve done more than most people. I can start an IV with night vision goggles in the middle of a marketer attack. I didn’t find this equivalent in the civilian world, and paramedics don’t make a lot of money.”

When the economy tanked in 2007/2008 Erik decided to switch career paths. Although he plans to finish he degree someday, he knew that his GI Bill® benefits wouldn’t get him through medical school and he needed another option.

“I moved out to California and continued going to school and I was about 2 math classes away from enrolling into a Bachelor’s degree when I decided to go in a different direction; commercial diving.”

While Erik went to commercial diving school, he also learned the skill of underwater welding. This is where he realized how much he liked welding, so although he worked as a commercial diver for 3-4 years, he knew it wasn’t what he wanted to do forever.

“I found out there’s just too many variables you can’t control; the weather, the ocean. I needed something stable. As I grew older, I decided I didn’t want to do commercial diving as a career, it was very hard on your body, it was lonely and dangerous.”

“I had heard about this program, and looked at it for about a year and a half before I pulled the trigger. I then just sunk everything I had into welding. I worked summers and then would make enough money to sustain myself while I was in the program. I even did a Discovery Channel show [found here] last year during the second part of the Flux Cored class.”

When he found Workshops for Warriors it helped ease his transition into civilian life.

“When I came here, I learned from people in the industry who had successful careers in welding. I knew that no matter what, I still had tangible skills that lead me to gain employment regardless of uncontrolled variables. It poised me to work full time. I knew I would always have a job because I could weld.” He added,

“It gives you a sense of community. You get the chance to talk to people you can relate to. Everyone here in the program has one thing I respect about them; and that is that they served in the military.”

Erik currently works for Integris and made the connection through Workshops for Warriors. He uses the MIG and TIG welding skills he learned at the school in his current position and is currently earing credit in an apprenticeship program. Because of the credentials earned at WFW he got to start out in his 2nd year of the program.

“Honestly, I had a job before I even started looking for one. I always hope to stay engaged, and I want to do something I enjoy doing. I’m want to help build America’s crumbling infrastructure with buildings, and dams, and hospitals. That’s something I’m interested in. I will go back and finish my degrees when I have a paid off truck, with a house, paid for in cash. For now, there’s a generation of Americans that were sold on liberal arts degrees and in debt. There is a huge skills trades gap and I plan on capitalizing on that.”