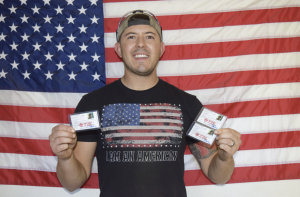 Welding Offered Job Opportunity and Security in a Small Town

Dustin is a 4-year Marine Corps Veteran with the communications battalion. He stayed in California nearly his entire enlistment and was a maintenance chief for Alpha Company.

“I enlisted as a new challenge to serve my country, and at that time the toughest branch. I wanted to get out and go back to small town America. I enlisted at 22 and was going to school at University of Nebraska and working as an equipment operator.”

Dustin really thought about his transition before transitioning out of the Military, and going back to “small town America” was a big reason he considered welding as a career before attending Workshops for Warriors. He is originally from Nebraska, but moved to Iowa in high school in a town of 1000 people.

“I wanted to come back. Welding is a big thing over in Nebraska and Iowa. It’s something I had some interest in and there were a lot of jobs available. I was online just on the Internet looking at different courses I could take while I was active duty and happened to find Workshops for Warriors.”

He is now working for Williams Welding in Hamlin Iowa. They are a successful welding company that also build grain bins and grain dryers for farming, and Dustin explained that he sees himself staying with Williams welding and adding on to the farm.

“I’m using MIG and Stick welding; everything that I learned [at Workshops for Warriors,]. If we’re in the shop building up a metal building, then we’re using MIG that I was taught. When we’re actually out on the job site we’re using Stick.”

It took Dustin about four months to get back to the Midwest, find the job, and figure out his housing situation. He explained that had he not started early he would have been struggling, so having his credentials to jump into the workforce was key, even though he had a slight welding background prior to WFW.

“I would say probably right after I got my first qualification was the first time within Workshops I knew I could do this. I thought, okay, what I’m thinking is doable and reachable. I’m learning all the techniques I need to know.”

Entering Workshops for Warriors as a Transitioning Service Member was important to Dustin, and going to school with others in the same situation helped ease that transition and give him and lead him on a path to success.

“[Workshops] helped me refocus on what I wanted and give me the opportunity to be able to settle down where I wanted to and know I had job security. I just feel like it’s a great organization. It’s awesome to transition out and go to school with others who have served because everyone has a different story and background, but we are all still connected by the service, so it feels pretty neat. I just want to thank everyone who is a part of it and hopefully one day I can pay it forward.”