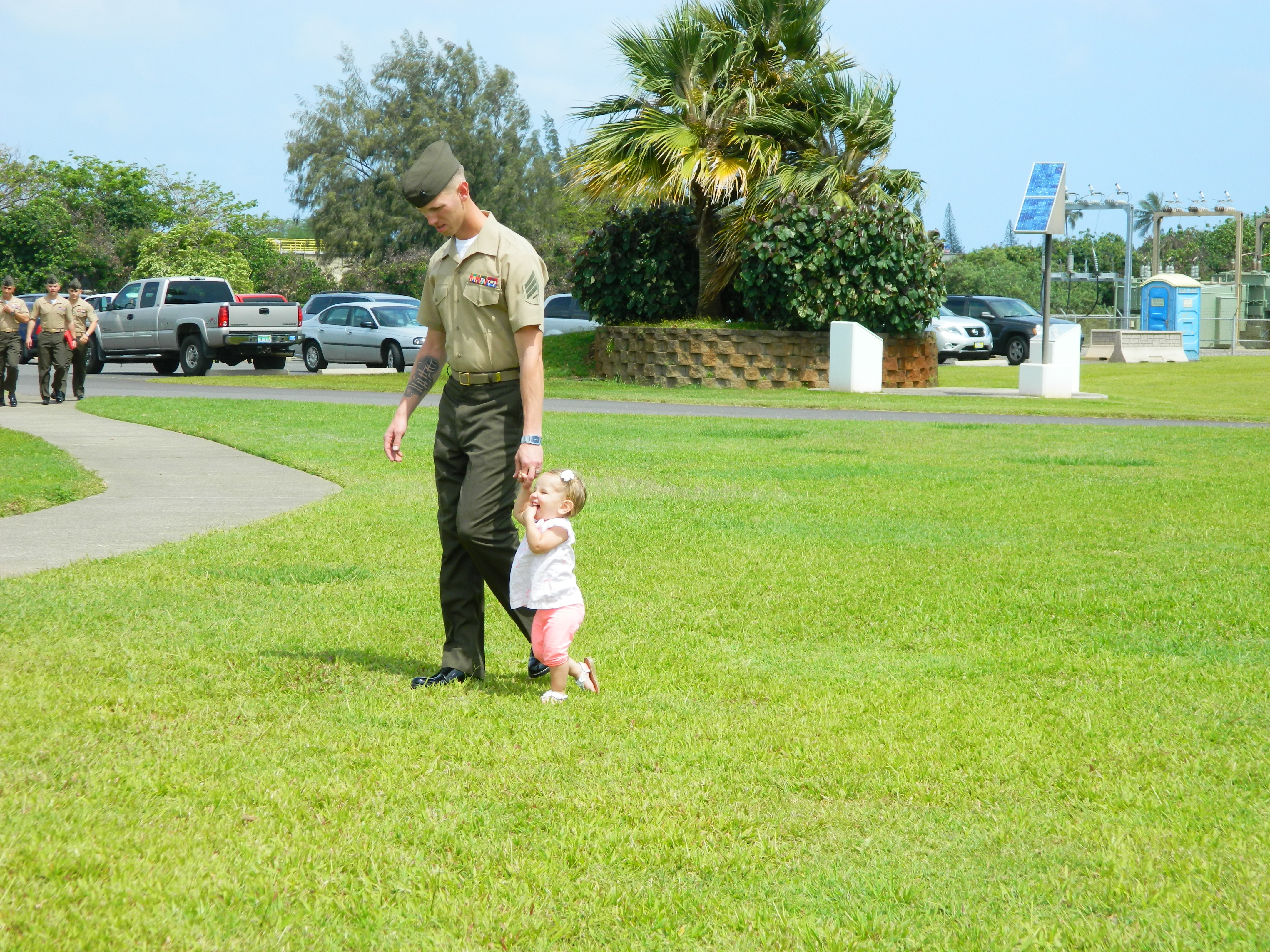 Chris with daughter Melody at his re-enlistment ceremony on Marine Corps Base Hawaii, April 2013

Chris comes from a Military family, which they can trace back four generations. His grandfather, an Army veteran because of the draft, was a driving factor in his decision to enlist. Chris enlisted in the Marine Corps one year before High School graduation, but because his mother wasn’t thrilled with that idea, he waited just one week after High School before being sent off to boot camp.

He knew the Marine Corps was where he was meant to be and where he wanted to be. Chris ended up at MARSOC (Marine Corps Special Operations Command), and despite going through this training during what he would consider being the best physical condition of his life, it was still pushing his limits.  A hip injury altered his future in the Marine Corps, and would eventually force him to transition out of the military after only an 11-year career.

“I brought it up right away. Throughout that time I was seeing a personal trainer and a physical therapist and they were monitoring it, but we went to a training exercise and at that point,  it got to the point where any movement, event natural movement like floating in a pool, felt like someone was stabbing me repeatedly.” He added, “It started when I went to ITC (Individual Training Course). I never had a problem before that, so I just tried to work through it without really realizing what was actually going on. I wasn’t taking it easy.”

The Doctor originally diagnosed it chronic tendinitis, so that is what everyone went off of for the second 4 years of Chris’s enlistment. Flash forward and Chris discovered he really had a condition called “bursitis” on his hip, and the very last month of his enlistment they also found that he had a herniated disc in his back.

“Special Operations in the Marine Corps–I saw that as the peak and highlight of my career. I couldn’t go any higher; that was it. That was the only thing and everything I had worked for up until that point. So pulling myself from that was extremely difficult. I thought ‘where do I go from here? How do I recover?’ There was nothing I couldn’t do, at least I felt that way. Now taking everything I’d learned, I couldn’t really apply it anymore coming off an injury. I couldn’t even do my own job.”

Because of this initial misdiagnosis, Chris continued to get pulled from therapy. He would get re-evaluated and then get pulled for another job, deployment, or task, and then he would have to start his evaluations and treatments all over again, so there was never a full recovery and he kept re-injuring himself. Flash forward and Chris discovered he really had a condition called “Iliotibial band syndrome (ITBS)” in his hip, and the very last month of his enlistment they also found that he had a herniated disc in his back.

In his 11 year career, Chris had two tours in Iraq, one tour in Afghanistan, and one tour with the 11th MEU. Although a Mortorman for all 11 years, his job responsibilities changed often because of his looming injury.

“Originally I got put in position as an Intelligence Clerk where I was just going to be helping around the shop doing small administrative work. As we were going through our pre-deployment training, our last qualification before we went to Afghanistan, my Intelligence Officer asked if I wanted to be the Intelligence Chief. I then did the entire deployment as an Intelligence Chief, meaning at that point not only was I mentoring all these Intel guys, working in a field completely different than mine having no experience whatsoever, but now I had to know and understand everything about that job/field to be able to make the Marines under me successful.” He further explained, “So originally it was just administrative work and accountability, while slowly leading to proofreading different analyses, proofing briefs and reports before published, and running the shop. I was helping analyze and dissect all the reports we got, so it was a whole different world to me.” 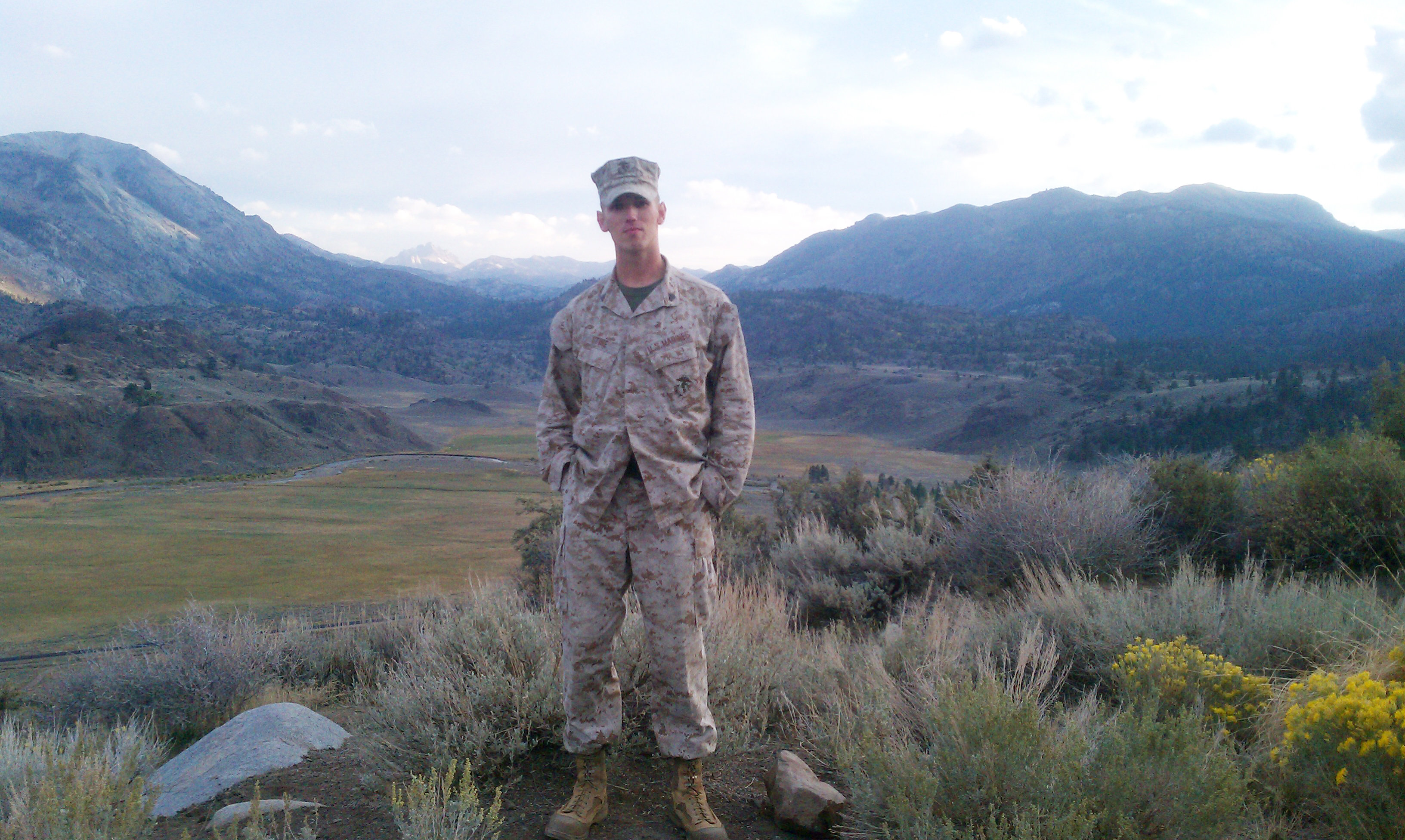 Chris during a training event in Bridgeport, CA, 2010

Chris comes from a Military family, which they can trace back seven generations. His grandfather, a fellow Marine because of the draft, was a driving factor in his decision to enlist. In his 11 year career, Chris had two tours in Iraq, one tour in Afghanistan, and one tour to the 11th MEU. Although a Mortorman for all 11 years, his job responsibilities changed often because of his looming injury.

“Originally I got put in position as an intelligence clerk where I was just going to be helping around the shop doing small administrative work. As we were going through our pre-development training, our last qualification before we went to Afghanistan, my Intel officer asked if I wanted to be the intelligence chief. I then did the entire deployment as an Intelligence Chief, meaning at that point not only was I mentoring all these Intel guys, working in a field completely different than mine having no experience whatsoever, but I had to know what was going on to be able to help the guys out.” He further explained, “So originally I was just administrative work and accountability, but then I started actually running the shop, proofreading our actual analyses, so it got to the point where I was actually proving their work before actually publishing it. I was helping analyze and dissect all the reports we got, so it was a whole different world to me.”

In addition to this deployment, Chris ended up working directly for the Makin Island (LHD-8) at 32nd Street Naval Base San Diego and was there for an entire year as a platoon sergeant for Combat Cargo Ships Company. “I was responsible for over 40 Marines and all operations on the flight deck and well deck when any and all Marines and cargo embarked and debarked the ship.” So throughout that entire deployment, it was well over hundreds of tons of cargo, and then upward of 5,000+ Marines and personnel manifested on and off the ship. Again, it was another aspect of doing something completely different for an infantry guy. “So not only was I in the intel field for two years, now I’m doing logistics for a year; I had a very rounded career although technically being a Mortarman my entire enlistment.”

“I eventually said I’m not getting pulled out of therapy until I get a full recovery. Once I get a full recovery I can actually do my job. Once I got put on limited duty, a 6-month period where recovery is your only focus, I got probably four different diagnoses for my hip and knees. Because of the misdiagnosis, they told me it’s not a disability it’s a condition, so I got put back on full duty. It was one of those ‘I can still do my job, I just have to find ways to get through the pain.’ My condition doesn’t stop me from doing the job, I just have to figure my way through it. So I did for a while until I couldn’t anymore.”

As time went on, Chris had to make another tough decision and not just leave training, but transition out of the Marine Corps altogether due to his injury. Even though he wasn’t necessarily doing the type of work he did his first four years enlisted, his hip, and unbeknownst to him, his back continued to get worse. 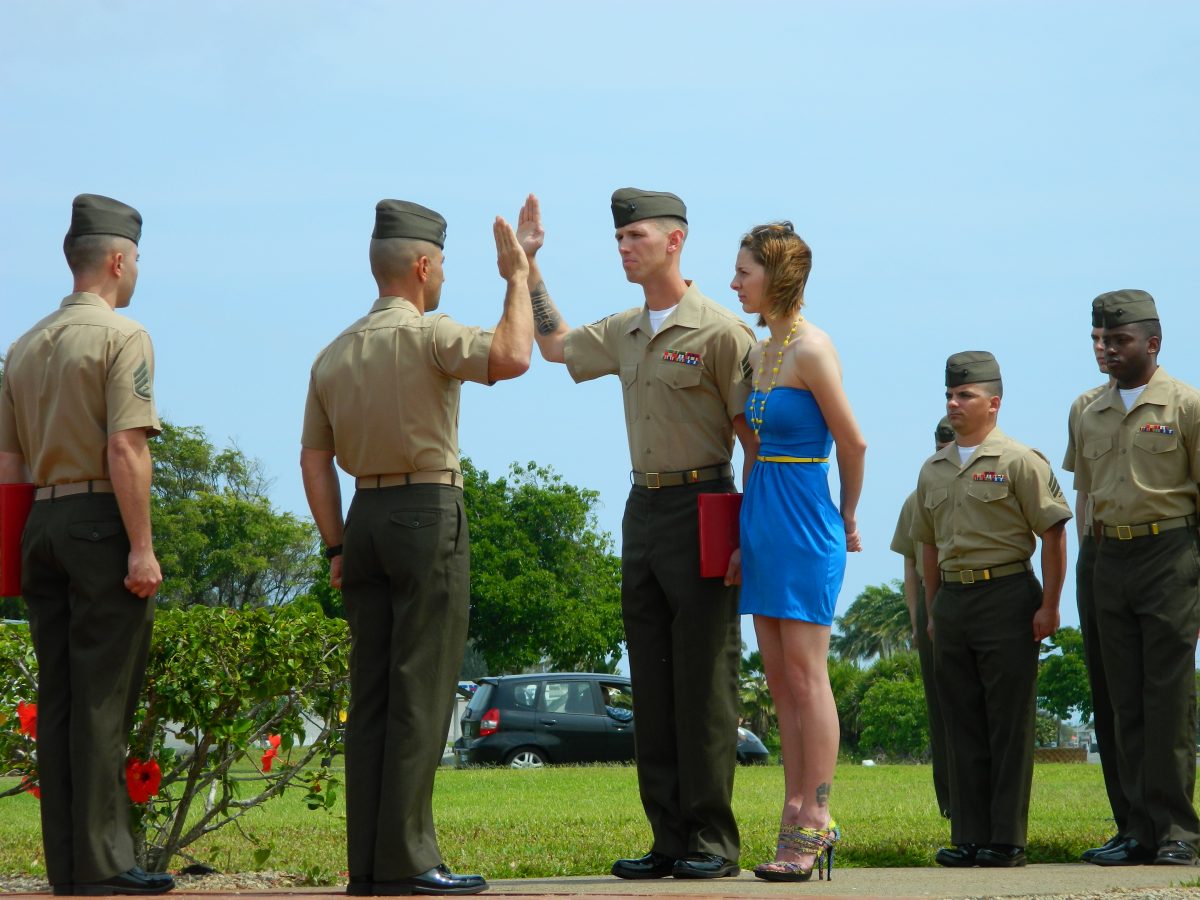 Chris during his re-enlistment ceremony on Marine Corps Base Hawaii, 2013 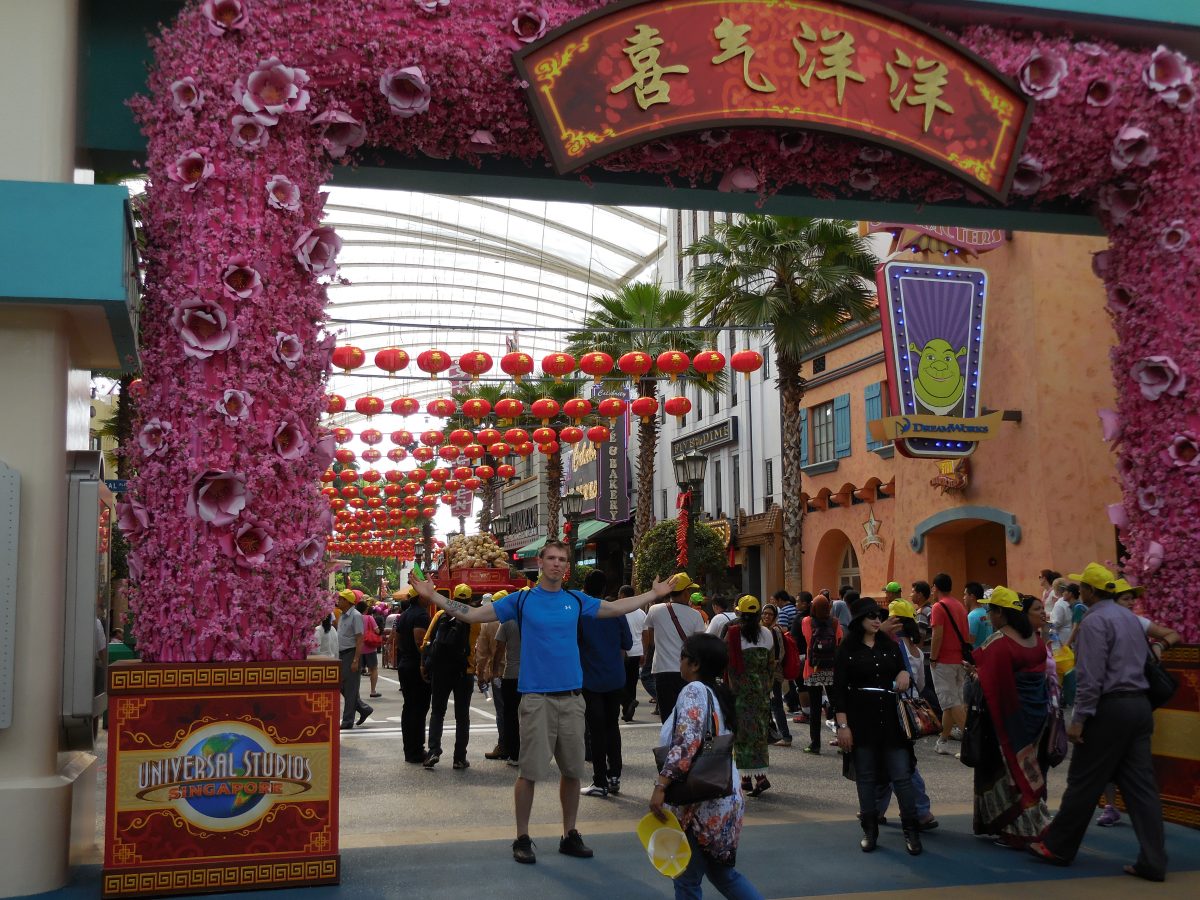 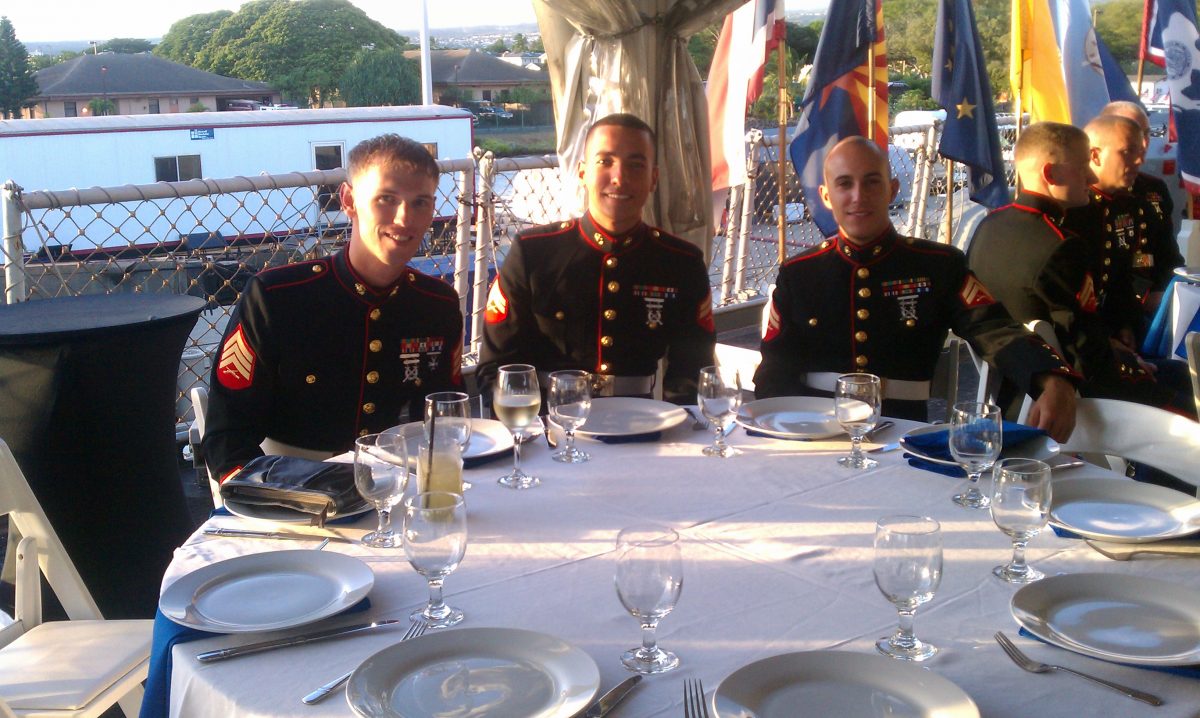 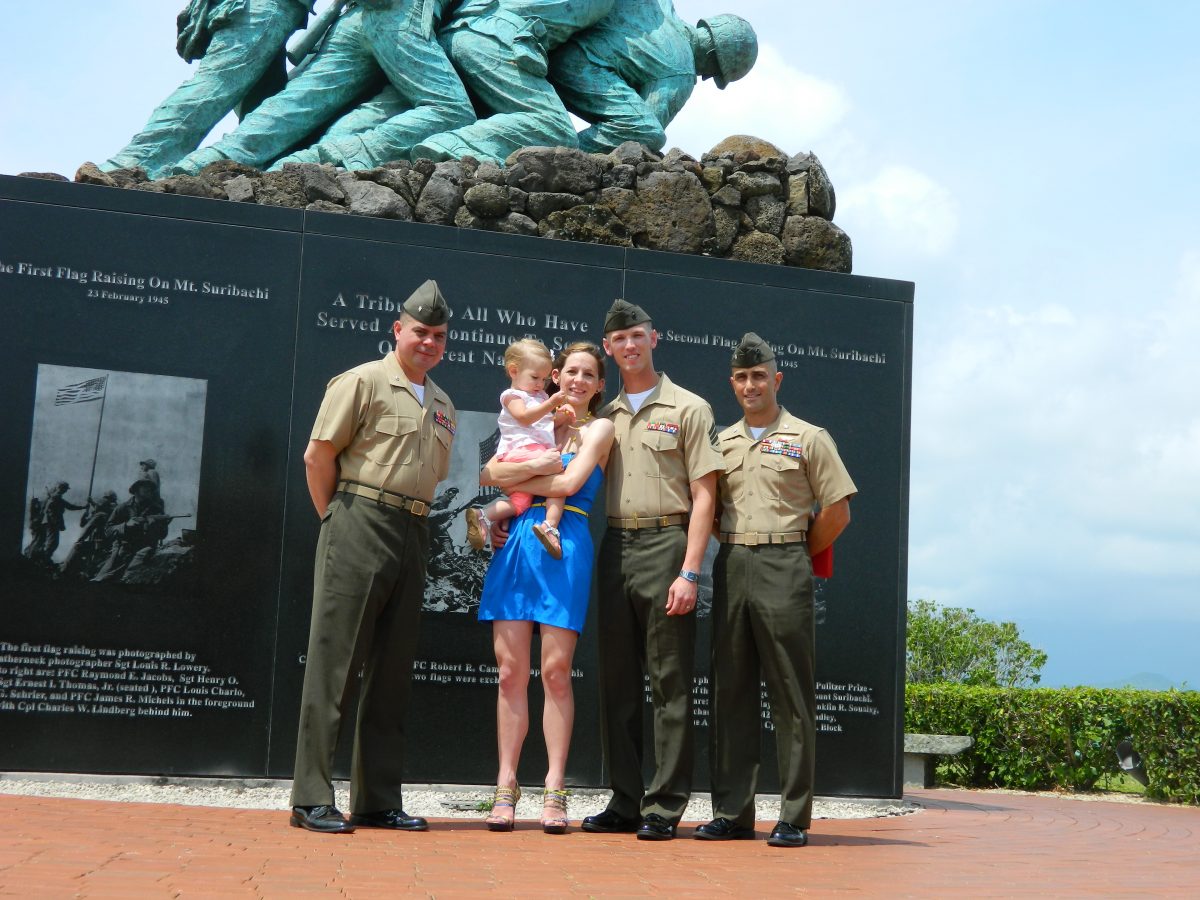 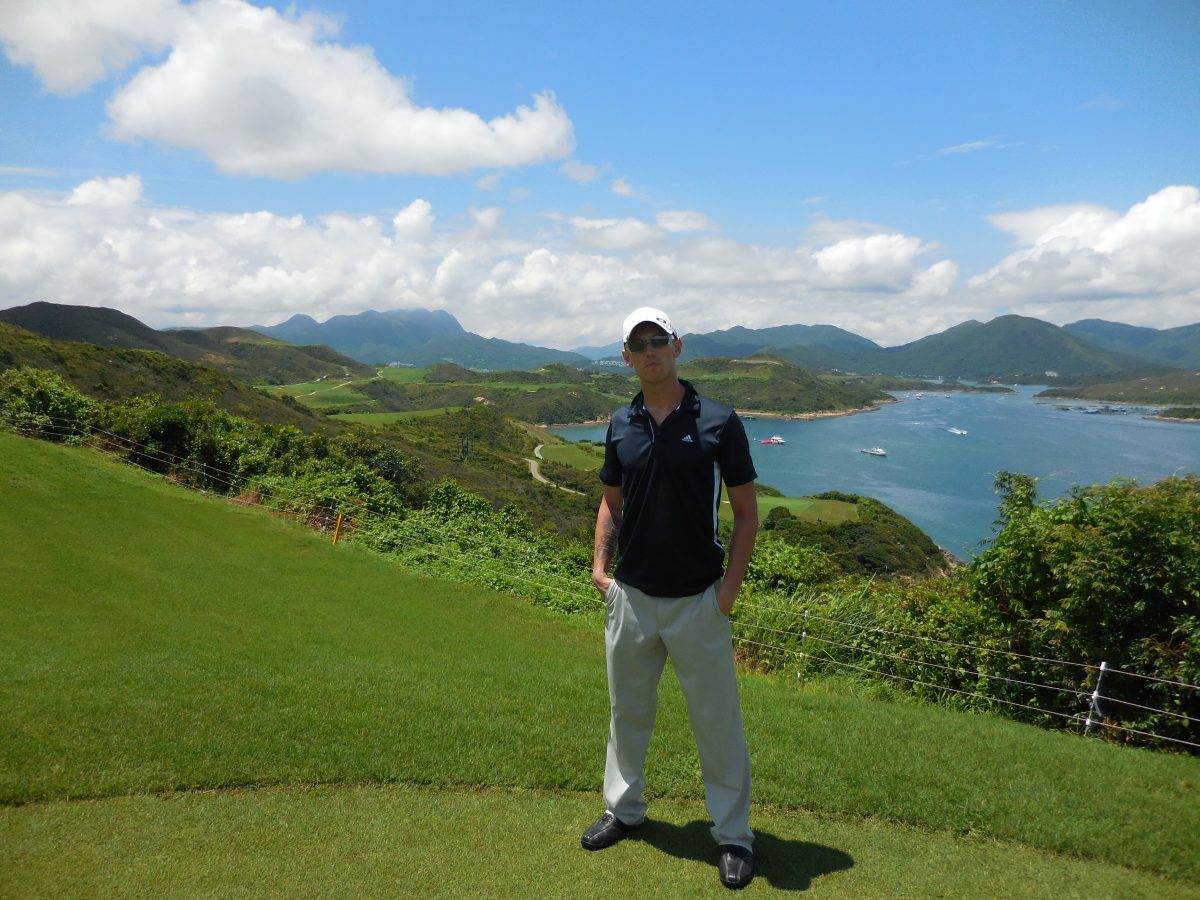 Chris during his 11th MEU deployment in Hong Kong, 2014 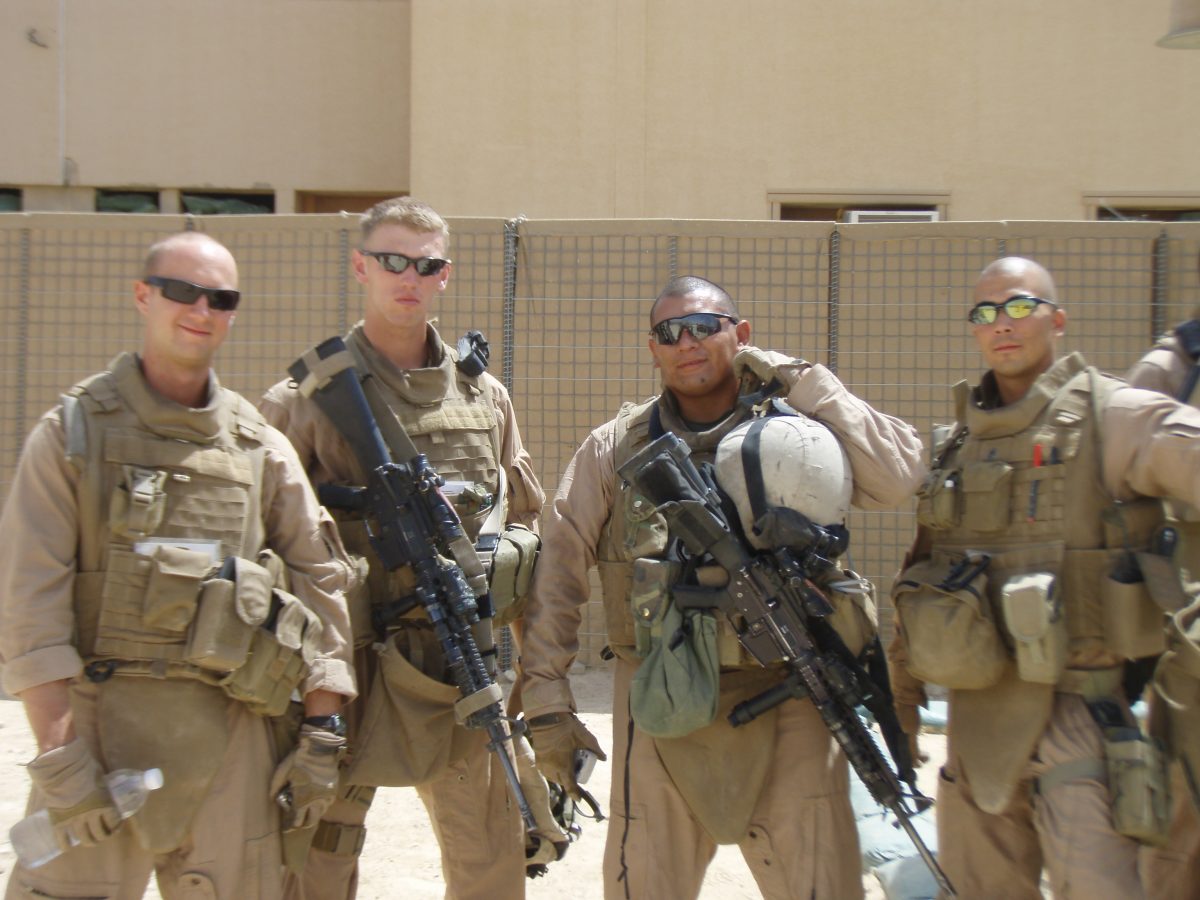 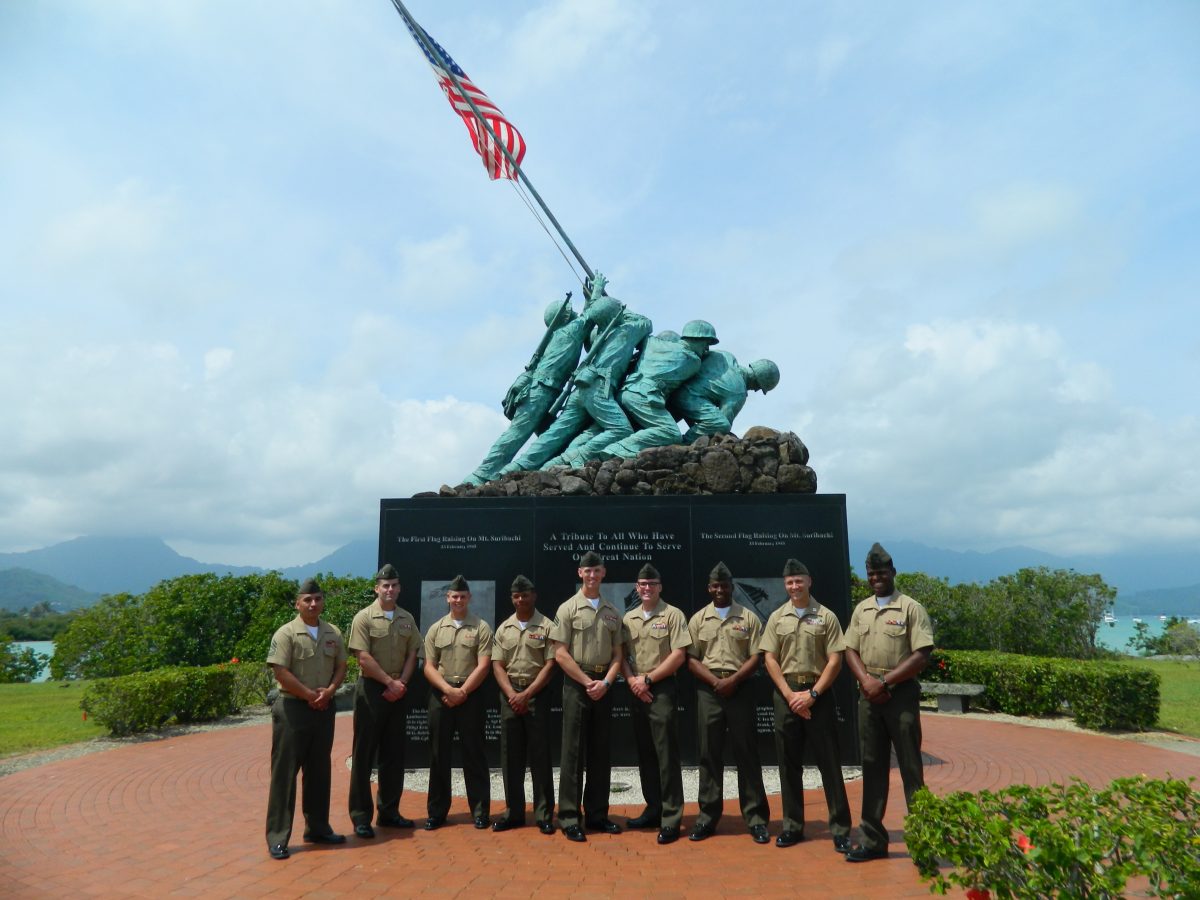 Chris with his unit during his re-enlistment ceremony 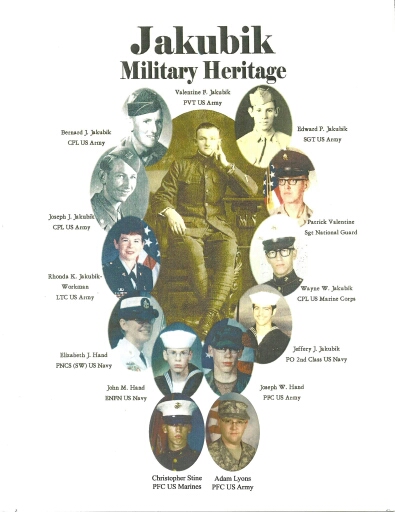 “They were getting ready for the deployment while I could not even pass the medical screening needed to attend the required schooling to get promoted. Dealing with the pain, it just continued to get worse. I didn’t want to take myself away from my wife and our kids again, especially not being able to do much already, so I made the call.” He added, “It was hard for me to accept. At that point, I was on my way down the hill. I had served 10 years, was looking towards retirement, but I couldn’t get promoted. I had no desire to get out of the Marine Corps. Again, this is all I knew immediately after High School. Not continuing was not what I wanted, but with a medical condition I had to make a change somewhere.” 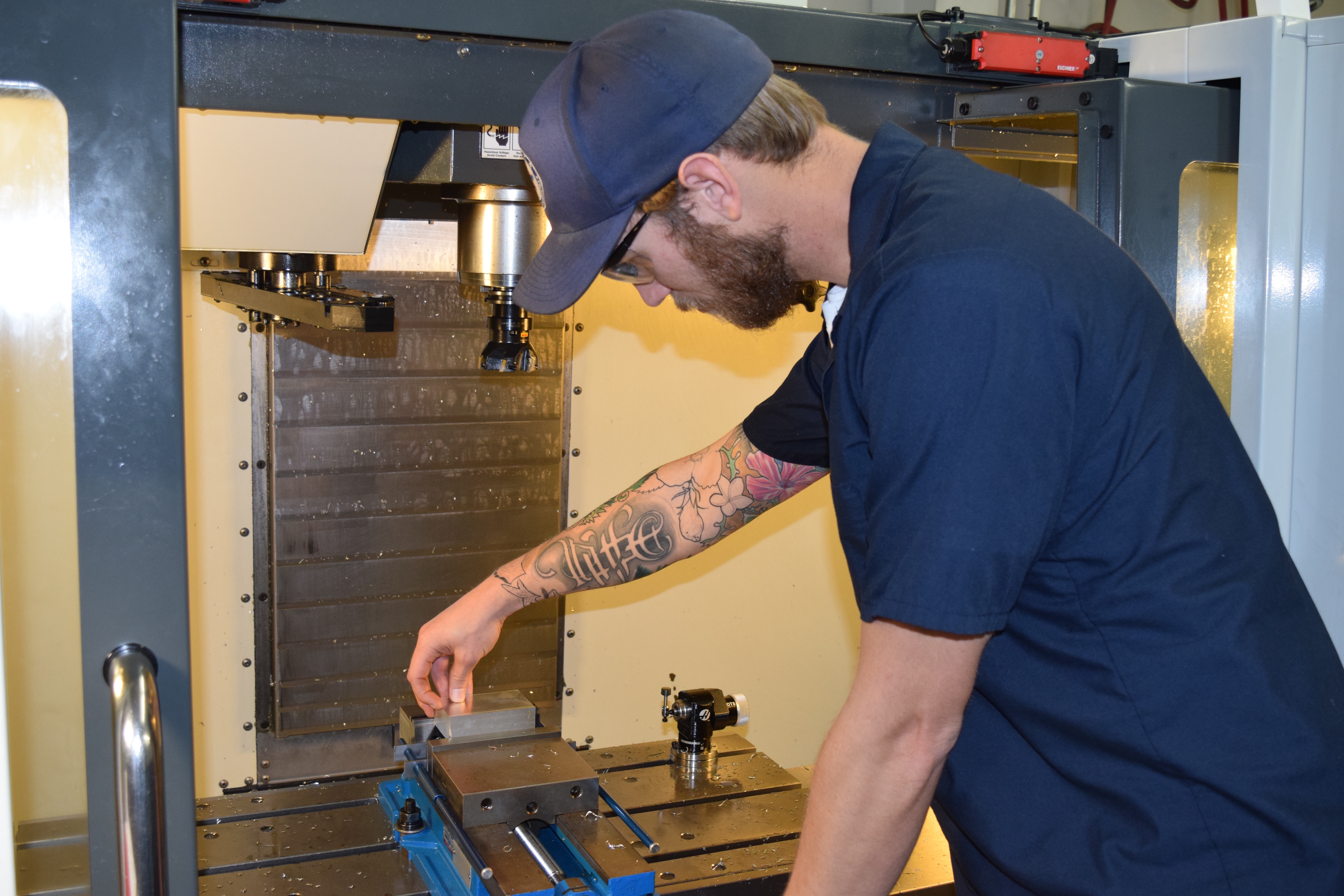 Chris started taking classes at a community college online during his seventh year in the Marine Corps while he was in Afghanistan and then continued to take a few more classes while on the 11th MEU as he worked toward getting his Associates Degree.

“My wife was going for a major in biochemistry, but that was put on hold when she got pregnant with our daughter. I ended up splitting my GI Bill® benefits with her so that we can both walk away with a Bachelor’s degree in two years.”

His wife focused on school first, which left Chris to find a job before planning to go back to school in 2 years for mechanical engineering. He heard about Workshops for Warriors during the Marine Corps TRS (Transitioning Readiness Seminar), and although he originally came to orientation to learn more about the welding program, machining was the perfect fit.

“In high school, I studied engineering and design for two years, so I just picked up where I left off.  I was sold.  I got everything approved by the Marine Corps and went through the program in January and finished with 11 certifications. Then I got selected to come back for the advanced portion and went through the whole semester and graduated, and now here I am as an Assistant Instructor.”

Chris was hired on as an Assistant Instructor for the Workshops for Warriors Machining program the day after he transitioned out of the Military. He explained that initially when being offered the position he questioned his ability to teach, but his time in the Marine Corps actually helped shape him into the instructor he is today.

“It took me a while to figure out, but the one thing that does translate from the infantry is teaching. I had been teaching for 11 years now in the Marine Corps, so I understand and have a feel for it, so now it’s just teaching what I know in advanced manufacturing and helping my fellow Veterans out in their transition and finding a new career path.”

Chris plans to stay at Workshops for Warriors and help others achieve their dreams. 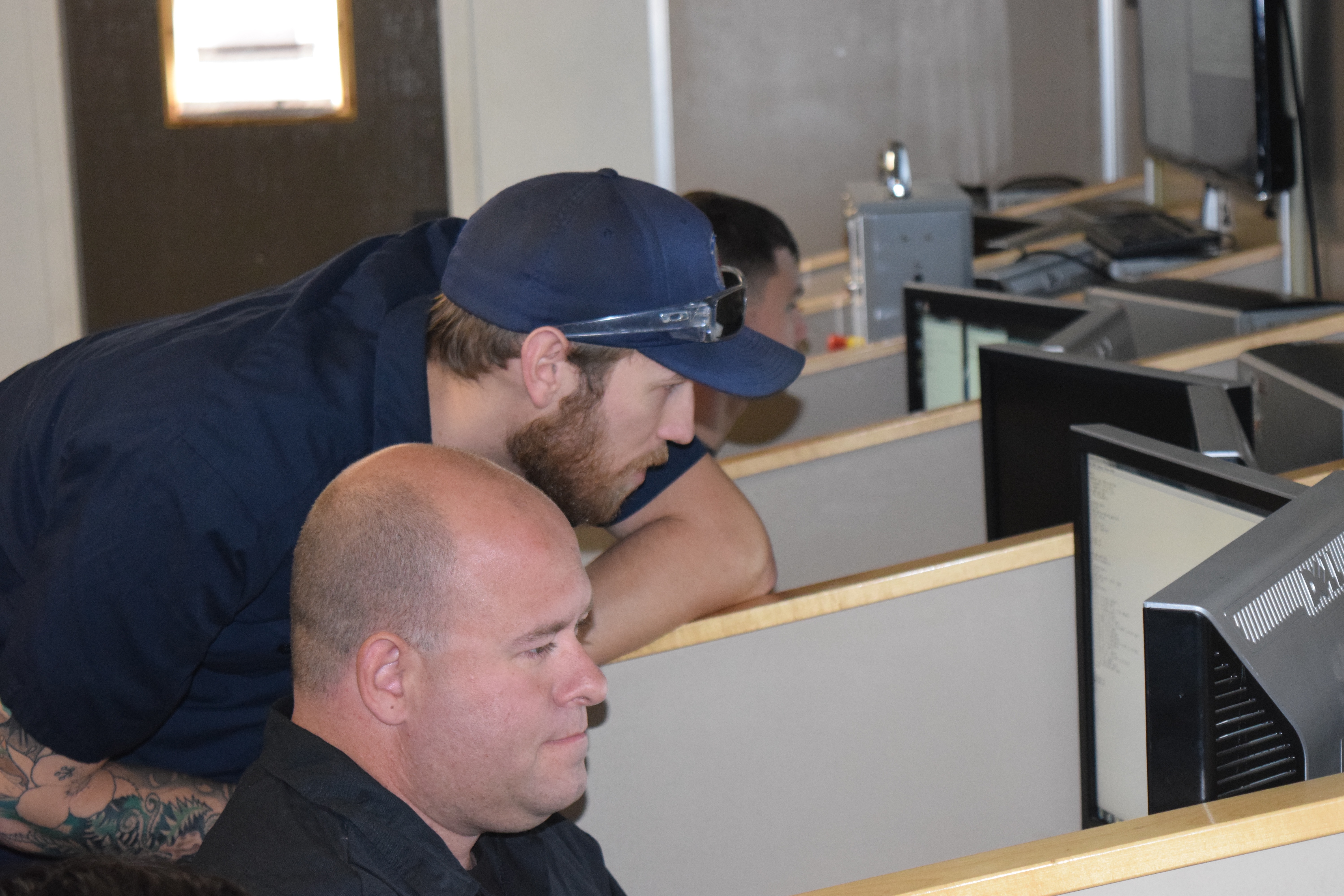 Chris as a Teaching Instructor helping a Workshops for Warriors machining student, 2016

“Its helping Vets and their transition and a new path, so I’m making an impact with my fellow brothers and sisters so they can achieve their dreams and aspirations. It’s rewarding. Right now my goal and future are to stay here as long as I can and see where this goes and what happens. Really watch how big this can get.  Again it’s not just for me, but to see how big of an impact we can make for Veterans and also manufacturing. I’m really excited to see how this unfolds and really impact and help everybody out continue to have fun doing it.”