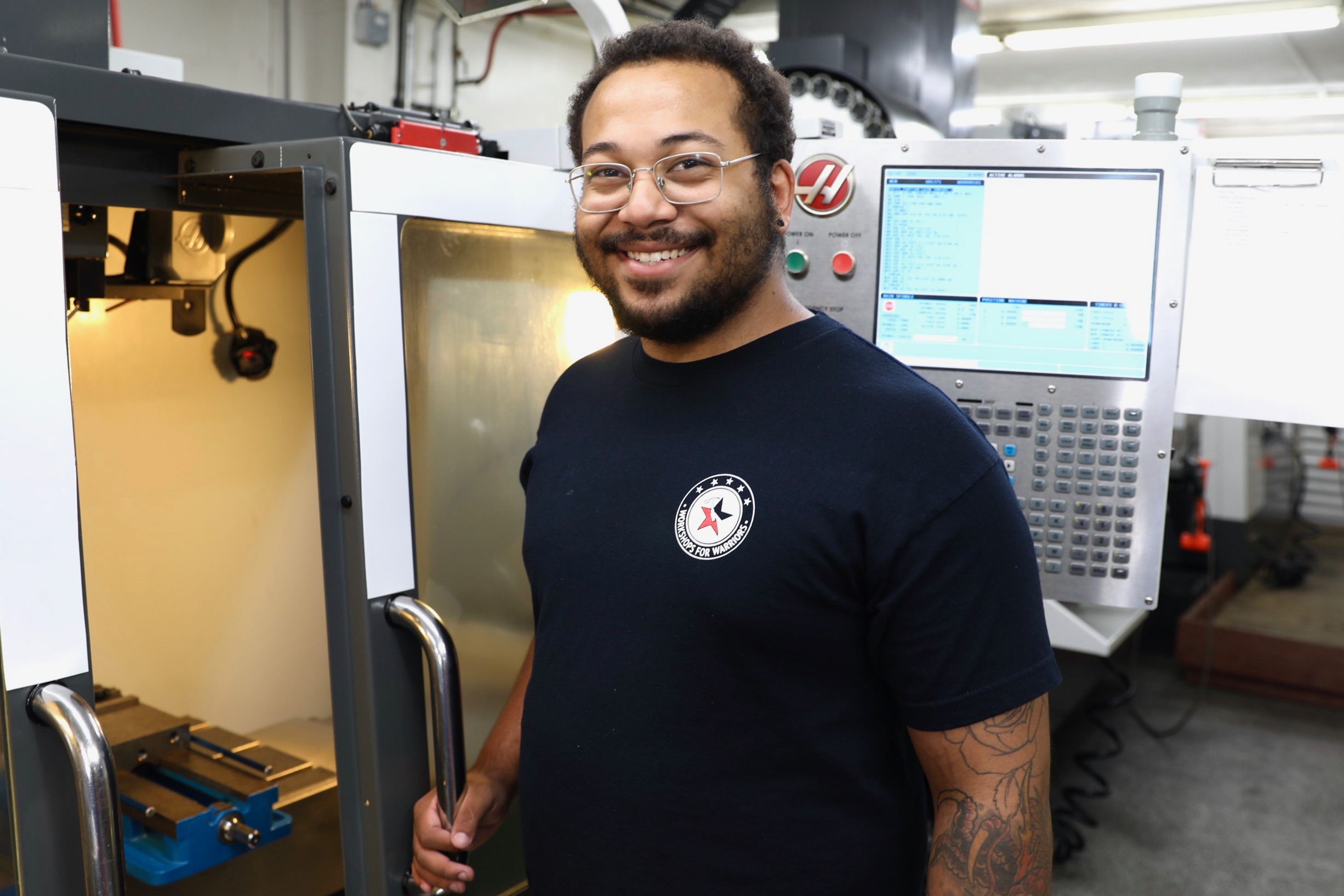 “I honestly wouldn’t have made it without Workshops for Warriors. They helped me get on my feet again.”

Craig Molina was raised in North Carolina on a Cherokee Indian Reservation with his adoptive Cherokee family. “I had a very good family,” Craig said. “Growing up on a reservation was hard. It was drug-ridden with lots of alcohol abuse. Luckily, my family wasn’t part of that.”

Ready to distance himself from a checkered life and environment, Craig walked into a Navy recruiting office and told the recruiter: “Get me out of here.” He was 18 when he joined the Navy in 2018.

Despite his high-level skills from doing IT in the military, Craig could not find a job when he transitioned out of the service in June of 2020. “I just couldn’t get hired,” he said. “It wasn’t for lack of trying either; I sent out so many resumes.”

At the time, Craig was also in the process of getting full custody of his two-year-old son, Kane, and going through a divorce. He began working two jobs – one at Pizza Hut, the other as a temporary forklift operator – trying to make ends meet and provide for Kane. Five days after starting the forklift job, Craig made a safety mistake and was let go on the spot. “It was just me and my son. I had no one to watch him while I was working. I had to stop.”

Craig said he was struggling with his mental health. “Life wasn’t going the way it should have been.” Then, his friend Nick Andrus (who is also a Navy veteran, Workshops for Warriors [WFW] Alumnus and former Teaching Assistant) convinced him to check out the school. “Nick showed me a video about Workshops and CNC machining. I thought, ‘Wow, that’s awesome. I can do that.” He enrolled in WFW’s Spring 2021 machining program.

“I got all the money I had – sold my computer, sold a couple guitars – I got some plane tickets, and my son and I came to San Diego.” Craig and Kane stayed with Craig’s friend from the military at first, but the day before WFW’s semester began, he found himself homeless. “I sat in a parking lot with Kane and called Keshia.” Keshia Javis-Jones, Workshops for Warriors’ Director of Operations, immediately found Craig a place to stay with Kane. “I burst into tears. I didn’t want my son sleeping in the car. She helped me through everything. It was the most amazing thing.”

Craig and Kane moved into Workshops for Warriors’ student housing while Craig trained with the school’s machining program for four months. A few weeks before graduating in April 2021, Craig accepted a job offer as a CNC Programmer with Hubble Power Systems in Alabama. “I’m on my feet. I’m paying my bills. I have Kane full time. Everything is perfect.”